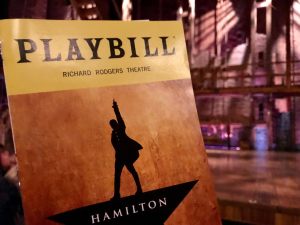 This week, Broadway is my inspiration for The Tuesday Tune-in.

Art can teach us a lot about relationships – even the ones we have with our babies.

Whether or not you’ve seen or heard the songs from this Tony award-winning musical, you can benefit from one lesson I’ve taken away from it:

Ok, I’ll admit – like many people in the United States – my family knows every single word to the soundtrack. It’s an album that we can all agree on. And even now, years after it had its heyday in my home, it is always a reliable go-to on long car drives.

One of the things that makes Hamilton so unique is that it is almost entirely sung. When you listen to the soundtrack, you’re pretty much getting the entire show. And for those who were lucky enough to see it, it’s an amazing experience to see an entire story told without speaking.

It reminds me of when I had my first baby and all the books and blogs said to narrate what I was doing with my baby. This would help him develop language, they all agreed. The idea was that the more language the baby hears, the more they will pick up on the sounds, syncopation and structure.

I tried it for a bit but, I have to say, it always felt ridiculous.

But you know what did feel right? Singing it.
For example: Picking my baby up from the crib,

“I’m picking you up now and we’re walking into the kitchen.”

As you go about your day, narrate it. Let your baby in on your story, on your thoughts and feelings. BUT don’t just narrate in words. Put it into melody, rhyme and rhythm. The more you do that the more your baby will be listening.

You can even challenge yourself to rhyme at the end of sentences. Hell, take a page from “Hamilton” (and rap and hip-hop) and see if you can even rhyme in the middle of sentences.

Here’s some inspiration. The creator of “Hamilton,” Lin-Manuel Miranda’s rhymes are so good they’ve been analyzed mathematically:

“Thomas Jefferson, always hesitant with the President
Reticent—there isn’t a plan he doesn’t jettison
Madison, you’re mad as a hatter, son, take your medicine
Damn, you’re in worse shape than the national debt is in”
from “Cabinet Battle #1”

And once you do it, you may find that it’s hard to stop. Here’s how Miranda felt about it:

“We found that if you start with our opening number, you can’t go back to speech. The ball is just thrown too high in the air.” (Mental Floss)
Once you start singing what you’re doing to your baby, it will feel incredibly natural. There are a few scientific and emotional reasons for this.

First of all, it turns out babies are much more interested in hearing us sing rather than speak, according to a study in “Infant Behavior and Development” (2004) They hold their gaze longer on the singer and even move their bodies less signaling that we are holding their attention.

The next reason is because it makes us more playful. When I did this with my baby I was organizing my words into repeatable and simpler phrases, which rolled off my tongue more easily. I’m sure that was much more relatable to my baby. It was definitely more interesting for me.

The third reason? it just made my baby and I a little happier. Suddenly we were smiling; we were bopping to whatever I was singing; and I was making myself giggle at the rhymes and the silly melodies that I was coming up with.

The creator of “Hamilton,” Lin-Manuel Miranda figured out how to hold the attention of the world with just this type of rhyme and silly melody. He figured out that if he brought us a show that had a strong rhythm to it, syncopation that made us move, intricate rhymes, and clever phrasing, then it would hold our attention. (It doesn’t hurt to have a fascinating story and a hugely talented cast either.).

With those tools, he managed to tell one of the most complicated stories ever told on stage with a soundtrack that is listened to over and over and over by all ages.

So I say: Let’s take a lesson from Hamilton.

Let’s learn how to be more engaged, more playful and more joyful.

And, along the way, let’s star in our own home-made musical.

Do you star in your own home-made musical? I want to hear about it! COMMENT in the comment box below and tell us how you do it.

What’s your favorite “Hamilton” song? Comment and let me know.

If they know all the lyrics like my kids, I can assure you they’ll appreciate this read. Forward along!

Love this blog and would like to receive more to your inbox?