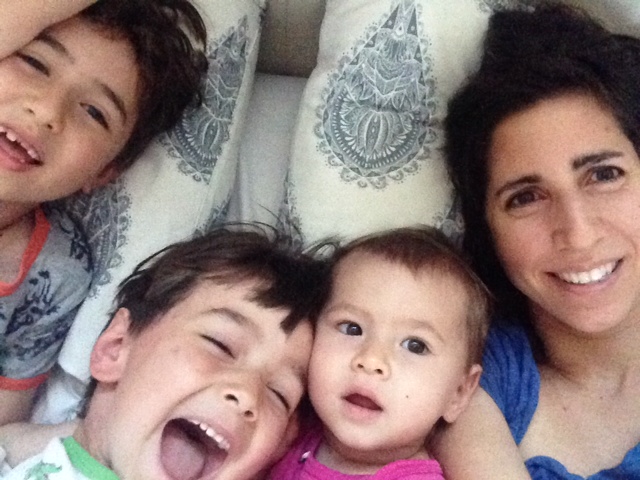 The third baby feels like a gift that the world offered to me and I selfishly took.

Did I just write that? A gift? How about when she is crying at 3am or is having her 5th tantrum of the day? And Selfish? What about all the selfless giving that it entails?

A gift, because I am ok with it all and am even enjoying it. I was ok with the nursing pain, the teenage hormones, the sleepless nights, the lonely bubble, and now the incessant diaper changing, the frustration, the shrieking, the demands. all of it feels inconsequential compared to what I am getting.

My father says that watching me with my daughter is like watching a girl with a baby doll. All he sees is play and playfulness. Most of the time I am laughing or smiling with her as she rolls around in my arms.

I swear I was not this sappy with the first two. Actually, I was so in shock the first time that I changed careers completely and started to write songs about my experience. I couldn’t come to terms with my identity shift. In my eyes I went from independent rock star woman to baby slave. My time wasn’t my own and my day to day felt like an endless string of waiting on his majesty. Not to say that I didn’t enjoy him immensely. I did and he ended up inspiring an album of love songs. But I mourned my old self daily.

And then came the second. And with him the frenzy of trying to save the first from the terrible trauma of losing my full and attentive love. At the time it felt like a tragic Shakespeare play in which my first was being brutally abandoned by the two people in the world he thought he could forever count on for love. In my dramatization I over compensated and practically ignored my beautiful little baby who watched my every move with big eyes. Slowly he learned to take care of himself in a way my first never did and now surprises me again and again with his independence and ingenuity.

And then the third. A lot has to do with just getting used to something. I got used to having babies and all that comes with it. I also got used to the emotional roller coaster, the effect the kids have on each other, the affect a new baby has on my marriage. But also my identity has long ago shifted to include ‘mother’ as an integral part of it. And, I don’t worry about the first two as much because they have each other to push off of and don’t always need me.

Anyone close to me knows that the decision to have a third was one of the toughest I have made. I was so nervous for so many reasons, one of them being that I felt it was a selfish act. Would my boys be ok? Would this harm the family in any way, which we were already so lucky to have? Would it be too much for us financially and emotionally and we wouldn’t be able to parent well?

And now I see that yes, it was selfish. It is a gift that I was able to take and am enjoying so very much.