Not sure how I got myself into it. A day flight, with three kids, on my own, including a 1.5 year old lap-baby. Is this what hell looks like?

Let’s back up. I spent a great month in Israel. Grandparents galore! And we did it right this time – the boys went to camp and the baby went to daycare. So they got their Israeliness (Alona says oy oy oy alot now) and I got a break during the morning. It was hot. But surprisingly, New York feels even hotter than Israel was. We did spend alot of time at the pool and the beach.

This time around I was struck by how alive Israeli’s are. Maybe it has something to do with living under the threat of war as a normal state of being. Here, we are just getting used to the idea that terror attacks can infiltrate the western world. Israelis were born into that reality.

It can make a person close down emotionally, deaden inside in order not to feel constantly overwhelmed. And for some people in Israel it does. But I also sensed the opposite. I felt a carpe diem quality that propels them to live strong, hard, fun, and edgy. The parties are intense. The protests are everywhere. And what struck me most of all, was the flirty nature of Israelis. Flirting happens at the deli, at a restaurant, at the playground. “You mean you don’t flirt with the dads at the playground?” My friend asked. I was appalled. Hell no! I completely close off that part of me when I am in ‘mom mode’. Flirt with another woman’s husband? Lord have mercy! “But,” she said “It is part of being alive. We are sexual beings. It is possible to be playful without acting on it.” I have to mull that one over.
I have been feeling hopeless and helpless about the state of America and the world and this attitude was a refreshing way to cope with it all.

Back to the flight. Here are the things I feel were crucial to getting through hell on wings. None of these are going to surprise you but it is good to have a list.

1. Duh. Screens. I had the kindle, the ipad, another ipad, the laptop, and the screens on the chairs to save my ass. The boys watched for 11 hours straight. Every program or movie I ever said no to. Time limits null and void. I even downloaded some Elmo for Alona who has not had any official screen time yet. She LOVES the videos of Elmos singing with celebs. (25 minutes down. 10.35 to go.)

2. Snacks. You can’t bring enough. Puffs, crackers, lollipops (for the ears), fruit, sandwiches (if they don’t like the plane meal), water bottles, nuts, bars, all of it.

3. Sticker books. Each of the boys had one (mindcraft for the older and this one which I love for the younger.) Alona had a book of Sesame Street stickers which gave me a good half hour. Yes, I was counting my time in half hour segments. I could happily watch my movie while absent mindedly helping her extract stickers.

4. Painters tape. This is a simple trick I pass on to anyone who is having trouble with wiggly-baby diaper changes. It is endless fun. Tear off a piece, it gets stuck on their fingers, on their body, keep tearing and sticking. Long pieces, short pieces.

5. Markers and notebook. We colored alot. Baby on a swing, baby waving hello, baby with an elephant. She especially enjoyed opening markers, using them for a second, closing them back and putting them in the box. I enjoyed it a little less when I had to bend over in our close quarters constantly searching for the lost cap.

6. A rolling suitcase as a carry on. To put all those screens and snacks in. This is in addition to the smaller backpack of absolutely essentials that go under the chair.

7. Now we are heading into emotional stuff. Resignation. That there will be segments of rest but basically it will be non-stop work. We walked up and down the aisles ALOT. We made friends with every baby and every grown up who didn’t give us a dirty look. And it was important that I was resigned to doing it. I expected it.

8. This is also obvious, but don’t forget the carrier. That is where they will finally fall asleep when there is 45 minutes to go. Right before the stewardess comes and says babies can’t be in a carrier for landing. Noooooo!!

9. Mental preparation for the older kids. I prepared them for the fact that I will not be going with them to the bathroom every time, that there might be a line so they should go BEFORE they can no longer hold it, and that they will probably have to climb over me. They whined but they went to those tiny closets without me.

All in all the day flight was refreshing in a way. I am used to night flights in which I do similar stuff but am also exhausted and dying to sleep. This time at least I was up for the fight.

Any tricks you use for flights? let me know. I have many more in my future. 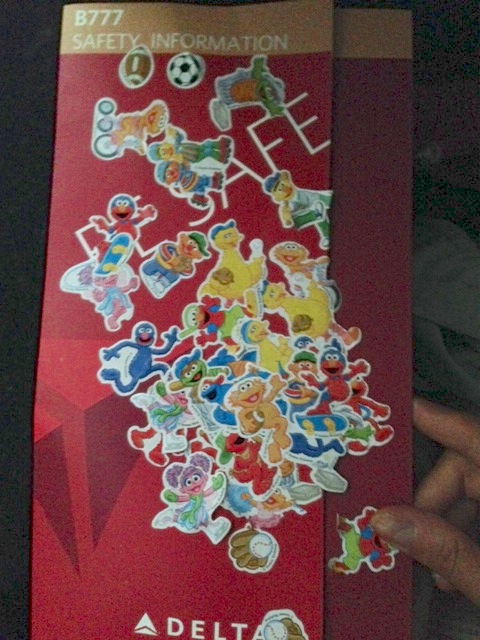