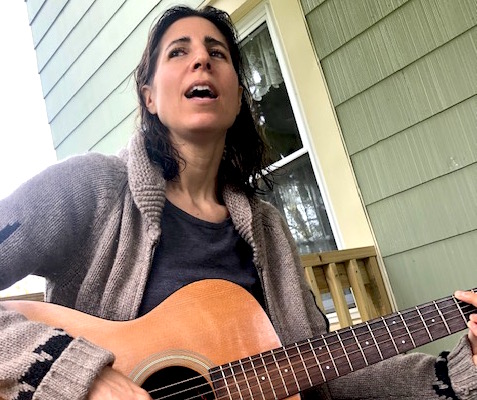 I’m on a bus in Croatia, pregnant with my first baby. Mountains to both sides and a good two hours ahead of me. I put my headphones on to listen to the album I had recorded before I left New York. I needed to listen objectively, as an outsider. I needed to be real with myself and figure out if a career as a singer-songwriter was in the cards for me or not. I was about to start a family and it was time for me to be a grown-up.

What did I decide?
That it wasn’t good enough.

This Tuesday Tune-In focuses on something that people don’t always talk about: Post-baby career reevaluation

So many parents in my groups feel confused and exasperated about their career once they have a baby. They don’t know if they want to go back to work, and if so when, and if not, what happens to the career that they spent 10 years building before having a baby. I should know. It happened to me.

Here’s what I learned:
Don’t rush to an answer about career pathing. Give it the time it needs.

Having a baby forces us to hone our value system and chisel our goals to the core, to the bare essentials. But it can take a year or two or even more. If we can allow for the questions, the confusion, and the feeling that the ground has fallen beneath our feet, I believe a clear path will emerge.

So back to the story.

I mourned my rockstar dream and eventually picked myself up and continued toward my other interests – psychology and therapy. I had my baby and 8 months later I began a Ph.D program in Clinical Psychology.

You may be asking yourselves – What the hell was she thinking? A graduate program with a new baby? And it’s true. The program entailed endless amounts of work and devotion. And, as you know, so did my baby.

I threw myself into both callings with all the energy I had. But there was a tiny voice that still whispered to me every now and then. You know which one. The singer-songwriter.

She didn’t go anywhere. And when she was ready, she presented herself to me through 2 songs that changed my life.

Song 1: “Don’t Leave Me”
In the midst of all the papers I was writing an old friend invited me to perform in a show. When I ran out of material, I asked the audience if they wanted to hear a ditty I had written to my son.

I sang the first verse and chorus of “Don’t Leave Me.” I didn’t have any more written and didn’t think I ever would. I thought I was done writing full songs. I considered it a jingle, a snippet that I blurted out to my baby one day.

A couple of friends from the psychology program were there and after the show they were enthusiastic about the song. They loved how it put a theory we had learned in school – “Rapproachement” – into a simple phrase and melody. They felt it said it all and could reach parents much more than any book. I went home thinking about it a little differently .

Song 2: “Sunday”
A month or so later, I went to see a music therapy colleague of mine, Jon Samson. I asked him to help me record five songs I had written a year earlier before that bus ride in Croatia. I felt I could move on more easily if I had a record of my final creations.

During a break Jon went upstairs and I continued noodling on the guitar in the studio. I softly sang another ditty I had written for my baby called “Sunday.” Again, I only had the first verse and chorus. To me, it wasn’t a real song.

From upstairs Jon yelled down, “Play that one again!” I did. And then he asked me to play it again, and again. He came downstairs and said that he wanted to record an album with me. But he didn’t want to do my grown-up songs. He wanted to make an album of the songs I had written for my baby.

And then what happened? Well, the rest is history.

I recorded an album with him called “Good Morning, My Love.” I realized that what I really wanted to do was help parents connect to their babies through music. I also realized that my prior meanderings came together in a way I could not have expected. Music therapy, psychology, the singer-songwriter, and the new mom.

Although I wanted to finish the PHD to the end, I also realized I couldn’t do it all. At that point, I was also pregnant with my second. Time was precious and I needed to focus solely on what I wanted to do most and shed the rest.

When I look back on that time, it’s astounding to me to think that I was going to give up on the singer-songwriter inside of me. I am thankful that I decided to play the two ditties for my friends. Their reactions inspired me to finish them, call them songs and share them with other parents. And that changed my life.

Having a baby motivates us to answer one of the most important questions:

What do you truly want to spend your time doing?

If you give yourself time, the answer will become obvious.

Have you reconsidered your career path post-baby? COMMENT below and let me know.
How did your inner voice show you the way forward and how long did it take? We’re all in this together.

Have friends trying to navigate careers after babies? Share this Tuesday Tune-In.
The best way to support the career of someone you love can just be letting them know you are there for them through the struggles and triumphs. Forward this email their way – sometimes it’s that simple.

Love this blog and would like to receive more to your inbox?

6 thoughts on “Two songs that changed my life”