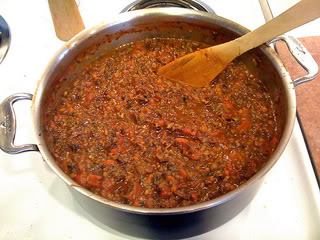 I am not a chef. I admire and envy those people who feel so utterly comfortable in the kitchen. Usually it is because they have been watching their mother (father?) cooking in the kitchen since they were kids. There was no scene like that in my house. My parents both worked a lot and I was a typical 80s key kid. Once we moved to Israel when I was 11 I remember making my own chocolate spread sandwiches for school and throwing together dinners that were usually omelet, toast, cream cheese.
My mother did have two or three meals that she made. As did her mother, as do I. For years I have been trying to expand on those and maybe this year will be the year. But for now I thought I would post a sample week’s menu as we start the school season. The thing is, if it were just my husband and I we would probably eat odds and ends from the fridge every night. But we have to feed these children balanced, healthy meals goddamit.

This menu is for my fellow NON-CHEFS. Those of you who regularly use things like salad spinners, graters, mincers, and food processors need not read on. Unless you want to feel good about your cooking abilities and chuckle about mine.

My hope is that you will post your weekly menus in the comments too. I need more suggestions and I imagine others do too. Meals that are quick and easy with very few ingredients are the ones I go for. Also, I don’t do meals that need any earlier prep time. That is reserved solely for dinner parties in which I want to impress friends.

You might read these and think – my kid would never eat that. Well sometimes mine don’t either. But I insist on saying to them – this is what is for dinner. if you don’t like it then don’t eat. I do allow for a banana or apple at any meal even if it is not on the table.

7 Meals that Can be Done FAST

After making two meals I usually need a rest.

This is really the most time intensive. It might be easier and faster to bake the fish or chicken but my kids like this.

(You can tell I am not a chef by how I am writing all these out. But I DO know they like to say the word “golden” a whole lot.)

5. Sushi Order-In (I realize this should not go on a recipe list but I want to put it out there that I allow myself a night of ordering in. Sometimes it is even cheaper than the other option.)

7. Weekend meals usually consist of lots of smoothies and sandwiches, and french toast for dinner

Please post your easy meals! Help out a fellow non-chef.