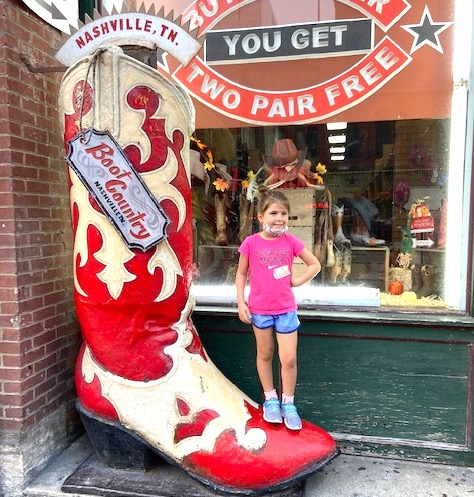 When we first started mapping out our year-long road trip, there was one place I felt we had to go despite the fact that it would mean a dip south before we head north – Nashville.

On our way there we prepared. We listened to John Denver as we went through the Blue Ridge Mountains, and Johnny Cash, Patsy Cline, Willie Nelson and Tammy Wynette through Tennessee.

They don’t just sing about suicide, divorce, murder, addiction, and betrayal. They do it by painting a DETAILED personal picture.

For instance check out this opening lyric by Kris Krisstoferson:

“Busted flat in Baton Rouge, headin’ for a train / Feelin’ nearly faded as my jeans”

We can almost see the guy sitting at the station.

Or how about these lyrics by Bobby Braddock in a song Gladwell talks about in the episode:

“He kept her picture on his wall, went half-crazy now and then
He still loved her through it all, hoping she’d come back again
Kept some letters by his bed dated nineteen sixty-two
He had underlined in red every single “I love you””

Again, the lyrics are almost cinematic. And the reason we can see the picture so clearly is because of the details – the year, the underlined letters.

Gladwell compares the top country songs of all time to the top rock and roll songs which are not nearly as sad or specific. The saddest song on the list is “the tracks of my tears,” which is about a guy at a party who’s feeling sad. There’s no suicide, murder or divorce in those songs, just the general heartbreak.

Where am I going with all this? I think we can learn from it.

Those of you who have taken my class have already been in a songwriting workshop. You know that as parents of babies you are only a short step away from writing a song with your baby. The way you naturally speak to your baby is already so melodic. All that’s missing is some repetition, and voila! It’s a song!

(if you haven’t taken the class yet you’ll be shocked to find out how easy writing a song with your baby is. Come try it!)

But let’s take our songwriting skills a step further today by borrowing a page from country music.

I wonder if we can do two these things when we write our next ditty with our baby:

When I started writing songs in my 20s I quickly came to the same conclusion Gladwell does. I realized that the more personal songs were, the more universal they felt.

That became my mantra. I didn’t want to write general lines like “you make me feel sad,” I wanted to create a distinct picture with details. And every time I manage to do that (I’m not saying it’s easy), it surprises me how people actually DO identify.

Take this song for instance. Maybe the only song in the world with the word “computer” in it?

When I wrote that song I felt like I was the only one on the computer trying to feel like ME again. Or desperately racing away to go to a yoga class, on the way brushing my hand across my belly trying to feel for the body that was once there. But every time I sing this song in class, I pick up my head to find someone crying.

Now, I’m not saying you’re setting off to write the next country hit or Madison Square Garden anthem. But I am saying this:

If you give it a go, and try to write a song using details that only you, your baby, and your partner know, you may just come out with your own private masterpiece. It may be the song that lives on in the lore of your family, The song your son sings to his friends at college to illustrate how silly his folks were, and the song that your daughter sings lovingly to her baby, as she gets inspired to write her own.

And now, I’ll move this oven hot computer off my thighs, I’ll forgive myself for having had a lot more extra bites of that salted caramel ice cream, I’ll put on my mom cape, and read three SEPARATE books to three kids because they can’t all goddam agree on one.

So what do you think? Will you try it? COMMENT and let us know if you’re inspired to croon about your baby’s freckle.

Do you have a friend who needs some inspiration for her next baby ditty? Send her this post! And tell her to sign up for more.

Do you want a soothing method that WORKS?